Assessment:
Inflation:
The Gov’t has already caused massive inflation. Just this month, Social Security announced a 5.9% COLA for 2022, suggesting that inflation is AT LEAST 5.9%.  I say “at least” because the price of many goods is clearly up over 10%.  See the infographic below, and the source site HERE. 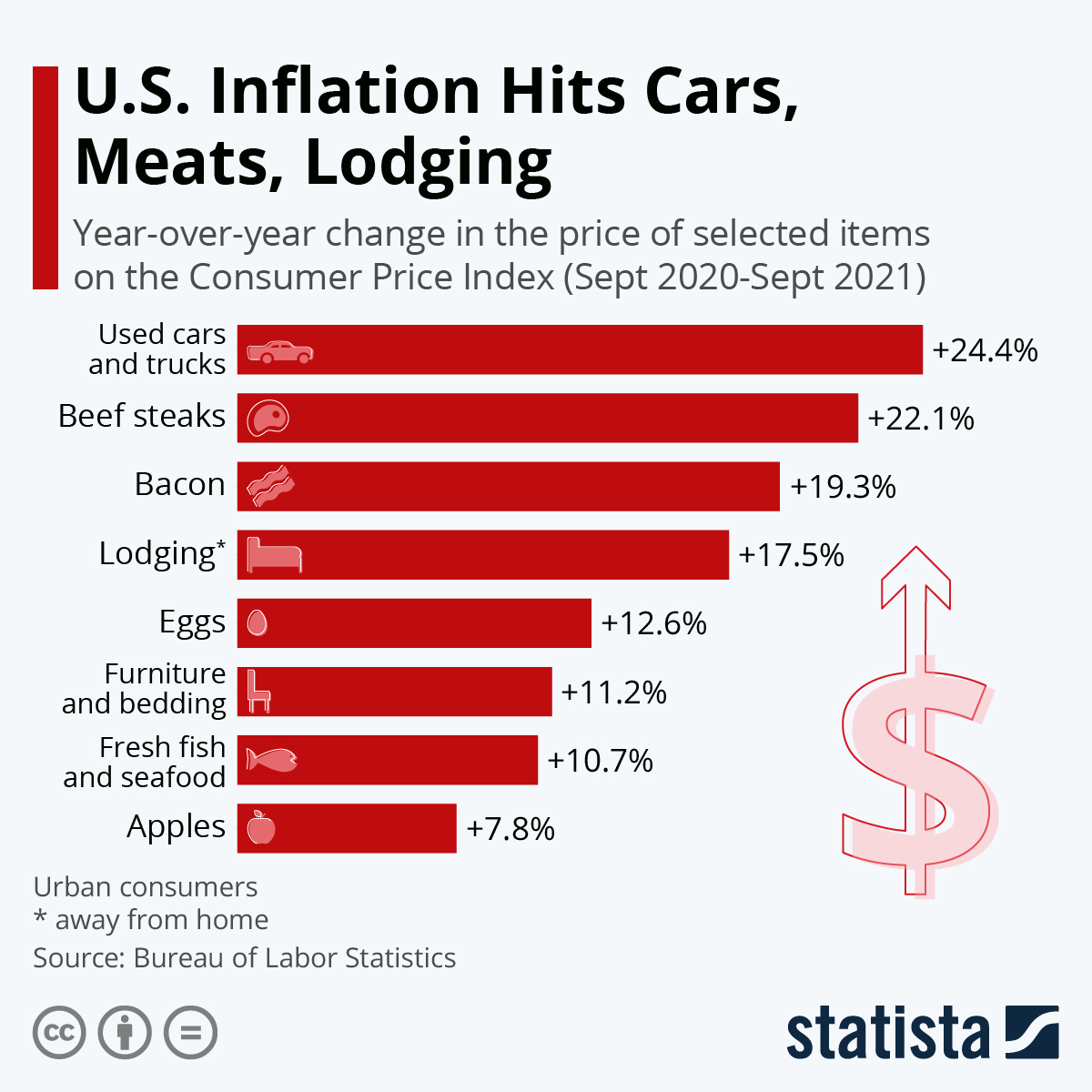 Remember, the gov’t has a motivation to deflate their COLA obligations as much as possible (because they have to foot the bill). So, 5.9% is likely on the low end.  Recall, the Fed originally forecasted 2.1% inflation.  In June,  the Labor Department reported a 5.4% increase in consumer prices over the past year – the biggest increase in 13 years, since 2008.  This forces the Fed to revise their forecast up to 3.4%, thru 2022.  Now, Social Security announced a 5.9% COLA which is the largest COLA in 40 years.  (Which, in turn, will cause the Social Security trust fund to be exhausted even earlier, now in the year 2034, see HERE, although some suggest even sooner.)

In case this worries you, let me remind you about stock market performance in the early 1980’s when inflation was rampant and interest rates reached 14%.

As you can see, people still invested in super-high inflationary environments.  Yes, there was a dip in 1981, but it was more than compensated for by the prior and following years.

Taxation:
The Federal Gov’t is also proposing raising taxes.  This increase is primarily aimed at corporations, small businesses and high-income earners (or married people).  Since these entities are responsible for employing people, the proposed tax hike is expected to cost over 300k jobs. See here for more details.

The proposed tax hike is expected to increase tax revenues by $2.1T, however some of this will be offset with proposed expansion of $1.04T in credits, bringing the tax revenue to $1.06T.  See above link for more details.

Doing the math, $4.5T in spending minus $1.06T in taxes equals a shortfall of $3.44T.  Where is this money coming from?  The easiest solution is the Gov’t could just print the difference, which decreases the value of the dollar, which leads to inflation.

The federal eviction moratorium has expired, and evictions are well underway.  Some states have implemented their own extension of the moratorium.  While the backlog of evictions is no surprise, stats indicate that over 90% of renters are current on their rent.  See here.  This would suggest that there may not be a glut of housing inventory hitting the market at once.
On a similar note, mortgage delinquencies are seemingly stable, if not even decreasing.   See here.

This is positive news for the housing market.

Bottom Line:
I am reducing F fund exposure.  Inflation leads to a rise in interest rates which will crush the F fund.
Otherwise, the overall economic trend is very good, unless the Gov’t stops it.
If the Gov’t gets it’s wishes – pumping $4.5T into the economy, driving up inflation and costing hundreds-of-thousands of jobs – we may see a sluggish economy.
But, until then, if the government would just step aside and let business do what they do best – create jobs and make money – then the economy looks very good.

Anyone who has more than 5 years before drawing income from their TSP should consider taking a more aggressive posture going forward and use my aggressive portfolio’s below.  If you are within 5 years of retirement, you should email me to get a more customized recommendation.

DON’T JUST LOOK AT RATE OF RETURN. Always view the target return of each portfolio in context of its ranges of fluctuation.

If you have any questions, feel free to contact me. 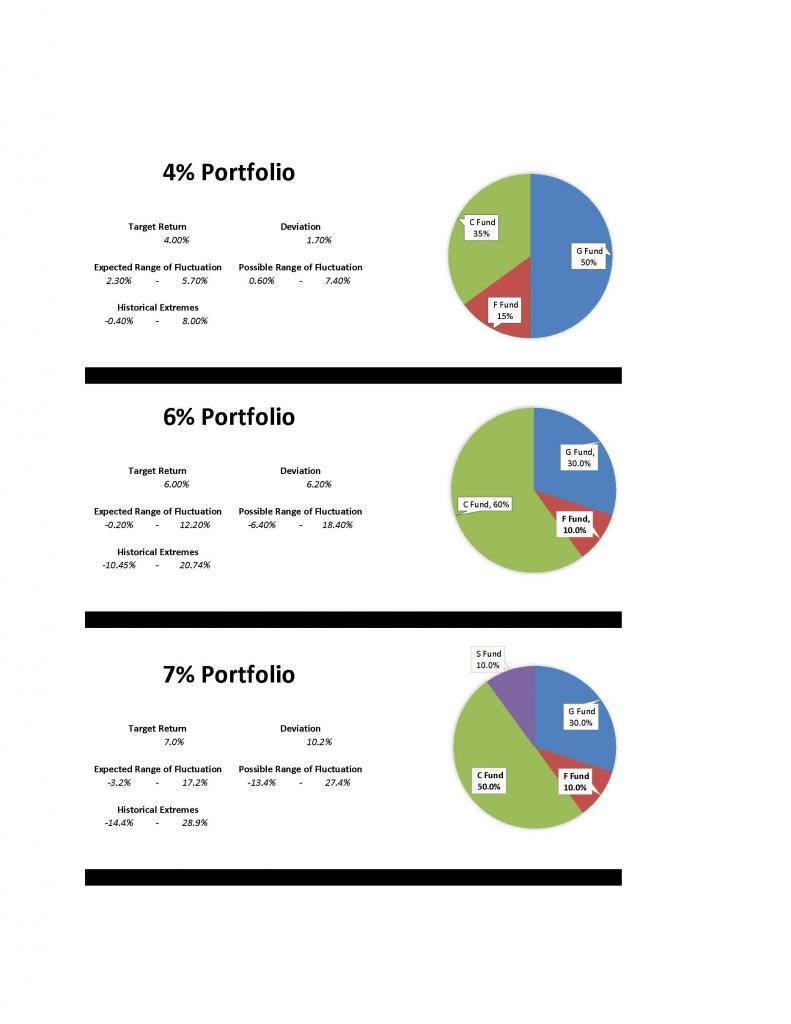 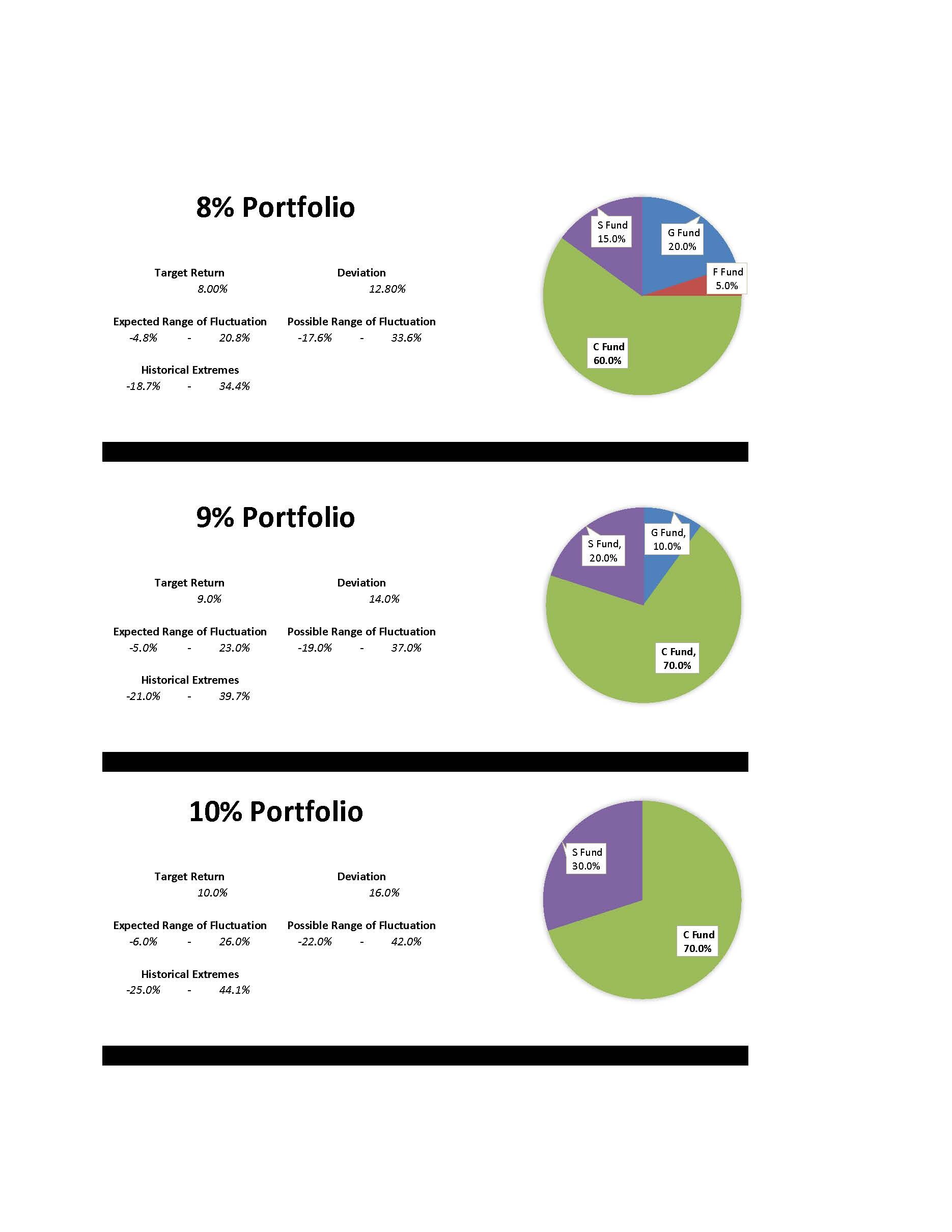 PrevPreviousQ&A – Funding & Replenishing the 10-year bucket
NextRetire early in the year, and get free money from FSANext
Facebook
Twitter
LinkedIn